The adventure began by having a medical and being informed that I would have to have my four wisdom teeth removed because they weren’t about to fly me out of the Arctic if I had a toothache.

Now somewhat toothless (at least missing four big ones), I was off for twelve weeks of training in Streator, Illinois, a small town south of Chicago. It was mid-March of 1960. There were 12 of us, as I recall, but I can only remember one fellow’s name, George Sicotte, who lasted just a few months on the Line before calling it quits and I never saw him again. 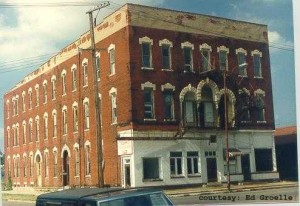 We were billeted in the old Columbia Hotel, a somewhat seedy hotel that was dubbed the Tiltin Hilton. It had definitely seen better days…much better days. As someone noted later, it was well past its “best before” date. Most of the guys had to share a room, but I was assigned to a closet-sized room of my own at the back of the building, complete with a bed and sink. None of the rooms had toilets and most didn’t have a sink, so we all shared the floor’s common bathroom facilities. Very fancy! It was more like a rundown rooming house than a hotel. 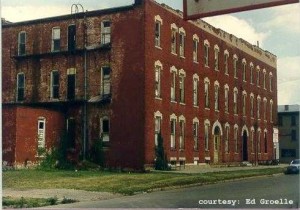 My room was on the second floor at the back, second window from the right. A depressing view. Photo courtesy of Ed Groelle.

The first course was a week-long weather observation course as one of our functions in the Arctic was to act as weather observers. For some strange reason, this was the only course that was mandatory to pass. If you failed this course, you were on your way home.

The technical courses were, well, technical. If you failed two of the weekly Saturday morning exams, the axe fell and you were on your way to a new career. The passing mark was 70 percent and not everyone survived the 12 weeks of training. Being a young, eager beaver, I studied my butt off and passed all the exams.

The following training schedule is courtesy of fellow DEW Liner Paul Kelley who apparently is a professional pack rat and kept every piece of paper he ever touched including all the material from Streator.

Although Paul and I were at at the same DEWLine station (FOX Main) for a period of time, we can’t remember ever meeting. It took over 40 years to pass before our paths would cross via the Internet. We subsequently discovered that Paul left the Line shortly before I was assigned to FOX Main as the Lateral Radician. Paul is busy documenting his time on the Line and I hope to “borrow” some of his work as time goes by. In the meantime, here is a brief outline of the 12 week training schedule.

While none of us needed a reason to drink, passing the Saturday exam usually sparked a celebration on Saturday night, giving us Sunday to recuperate. Some of us celebrated more than others. One of those people was a fellow classmate by the name of Reg something or other.

Reg was one of these people who wore thick glasses without which he couldn’t find the nose on his face with either hand. Very, very early one Sunday morning, Reg’s roommate found him huddled at the base of the shared toilet. Apparently, Reg had been out drinking, a lot, and he had been talking to Earl-on-the-great-white-phone. The roommate noticed that Reg didn’t have his glasses on and asked him where they were. Reg pointed into the toilet which was filled with an interesting brew. Not wanting to lose Reg’s glasses, his roommate screwed up his courage, rolled up his sleeve, and dipped his hand into the mess trying to find the glasses. It was at this point that he saw the glasses lying on the floor behind the toilet.

Reg’s roommate told us later that he thought his arm was going to rot and fall off. I told him that if it had been me, I would have used Reg’s arm to root around in the soup. Reg survived, but barely.

Middle of Nowhere
The training was held at a prototype DEWLine station in the middle of a cornfield about seven miles by road outside town along Highway 17. We were transported to and from the site each day in a blue military bus with US Air Force markings. Very fancy, indeed! 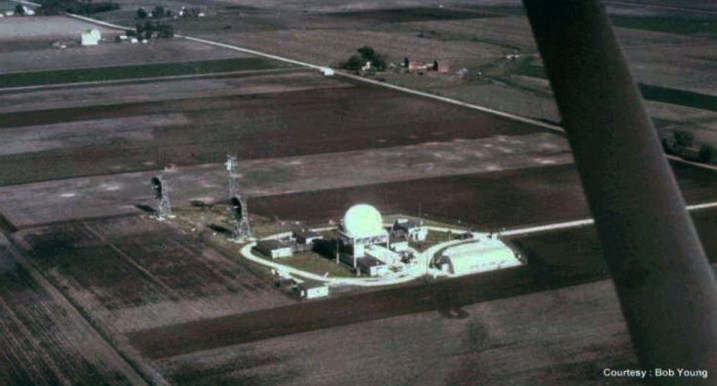 Note: Apparently the site was decommissioned in 1982 and the property was sold to the farmer whose land surrounded it. The radome was disassembled and is stored behind one of the buildings. According to DEW Liner Ed Groelle, who revisited the site in 1992, and again in 2010, the compound was now being used for storage. There were turkeys inside the fence, and sheep grazing in the area. 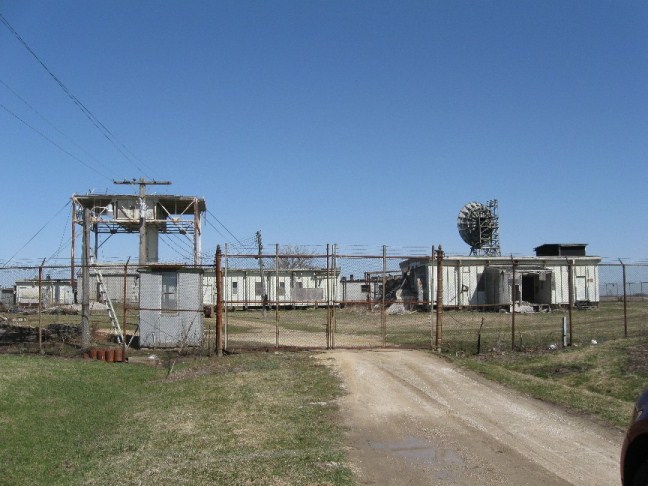 I remember the first time I saw the radar console. I noticed a control on the panel labelled “Anti-Jam Control,” and I thought great, no one can jam the radar. Little did I know at the time that all the control did was lower the sensitivity of the radar receiver, which not only minimized the jamming but also the radar’s ability to see any targets.

Apart from learning all about the technical equipment and how to repair and maintain it, we also had to learn how to track and report targets. Federal Electric engaged a local pilot to fly around at night to give us something to practice with.

The Streator Airport was a grass strip and was home to the local flying school which owned a Piper J3 (or a Taylorcraft, I’m not sure which) and a derelict Cessna T-50 Bamboo Bomber. This is where I got my first taste of flying small planes. I ended up with about ten hours of flight instruction, as well as rides bummed on the nocturnal practice flights. I wasn’t to take up flying again until the mid 1970s.

Streator was not what you’d call an exciting place. It certainly wasn’t a hotbed of social activity. I have no idea as to what its claim to fame was beyond serving the local farming community. There was no discernible industry. The town’s few restaurants served simple but good food. There was a bowling alley that served beer, which made bowling a whole lot more fun than it was in Canada where drinking in an establishment like this was forbidden.

One weekend, one of my other team members and I decided to get out of town for some excitement, so we rented the town’s only rental car and drove west to Kankakee. When we arrived, the whole town was eerily dark and quiet. We went into one of the local taverns to find it all lit up with candles. I thought, how quaint, only to discover there was a city-wide power outage. This didn’t seem to interfere with our ability to drink, however.

On the return trip, I was doing the driving and my drinking buddy turned on the car radio and promptly went to sleep. After a short while, I turned off the radio so it wouldn’t disturb his sleep. I then followed his example by also falling asleep…while I was driving. Fortunately, the rumble of the tires on the side of the road woke us both up before we went into the ditch, and we survived the adventure unscathed.

It turned out that while I had turned the radio off so he could sleep, he had turned it on so that I’d stay awake. What we had here was a failure to communicate.

Northward Bound
Upon completion of the training, we were issued airline tickets to our embarkation points for the journey north.

It was late July 1960, when I was issued with my US Air Force blue Arctic clothing at the Nordair hanger in Montreal’s Dorval Airport and prepared for the long trip north to Hall Beach in the North West Territories as it was then known (now called Nunavut). As I recall, there was about 15 of us and a pile of cargo crammed into the Nordair DC-4. Most of the passengers people returning from R&R (Rest & Recreation) leave and a few newcomers such as myself. 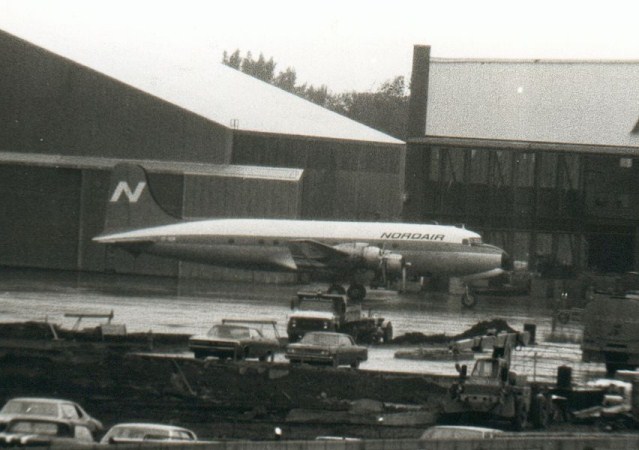 The Nordair DC-4 that took us North to Hall Beach NWT (FOX Main).

Our Arctic gear consisted of a set of heavily lined coveralls with zippers from bottom to top, a parka with a huge hood with real fur trim, thick boots with removable liners that could be used in place of shoes, and mitts with fur backing. The fur backing on the mitts was used to wipe your nose which would run continuously when the temperature got to 20 below or so. The problem was that the snot on the back of the mitts would freeze and it would feel like you were wiping your nose with rough sandpaper.

Before we took off for our northern adventure, we all made a pact that we would put money in a pot and the last person to cut off his beard would get all the loot. This fast road to instant riches was dashed when we arrived at our destination and were informed that beards were not allowed, as they might interfere with the seal on the Scott Air Packs that would have been used for firefighting. Apparently, the no-beard rule was relaxed in later years.

Next Stop
Your next stop on the journey are my personal stories. They begin, strangely enough, in the section titled Stories.