It was in the late 1950s when Canada’s prime minister at the time, John Diefenbaker, said to the youth of the nation, “Go North, young man.” So, being young and somewhat naive, I went.

I don’t remember if I found the advertisement or if my mother brought it to my attention. The newspaper advertisement was for electronics technicians to go north to the Distant Early Warning Line for a salary of $1,000 a month plus all living expenses. Training provided.

If you think $230 was pathetic, my first job at Electronics Materiel International (EMI) as an electronic technician doing repair and overhaul work on AN/ARM-1 test sets, paid $1 per hour ($174 per month). That wasn’t a bad salary for an electronics technician in 1957.

I took time off work to travel to Montreal to the offices of the Federal Electric Corporation (FEC) where I was interviewed and given a technical test that I promptly failed. As a newly minted, 19-year-old technician with two years of work experience, I knew nothing about radar. 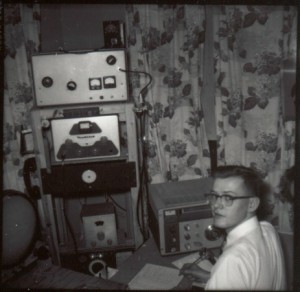 Although I was only 19, I had been dabbling in electronics since the age of ten and had built most of my own radio equipment. I got my amateur radio (ham) licence, VE3EBF, in 1957 after passing the technical exams. At the time, these exams were a lot more stringent than they are today. By the time I went to technical school, I had already built up a good business repairing radios. It appeared that I had a natural flair for electronics.

So, undeterred by my initial failure, I returned to Ottawa and went to the NRC technical library where I borrowed a couple of books on radar and studied them until I felt confident enough to take another shot at the FEC exam.

This time I passed the exam. Either that or they were desperate for technicians. Whatever, I was offered the job as an electronics radar technician, known as a radician. The employment contract was for 18 months, the first three of which would be spent training in the US before being sent to the Arctic. You were allowed a two-week vacation after nine months on the Line, after which you would return north for the remaining six months of your contract. Any subsequent contracts were 12 months in duration. I was to learn later that I was the youngest radician to ever be sent north to the DEWLine up to that time. 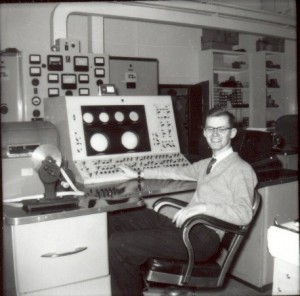 Brian (Simon) Jeffrey starting the computing day by "booting" up FERUT from the main console. Circa 1958

Now I had to go back to NRC and resign my position there. I was working in the Structures Laboratory (M-14) maintaining a huge digital computer known as FERUT. It turns out that FERUT was the first commercial digital computer sold in North America. It had originally been purchased from the Ferranti Company in the UK by the University of Toronto, hence the name FERUT, and had been used for research at the university until being acquired by NRC. I assisted in the final stages of the installation and was tasked with keeping the beast running.

At the university, it had been used to design the first automated traffic light system in North America, as well as being used for research studies for AVRO’s Arrow jet fighter, one of the world’s most advanced aircraft, and probably still would be if the development program hadn’t been shut down and all six prototype aircraft destroyed.

This thing had over 4,000 vacuum tubes and its own 1400-cycle generator to power up the filaments and the rest of the unit. Whenever I turned it on in the morning, a tube would blow somewhere and one of my jobs was to find out which of the 4,000 tubes had decided to die. I had gotten to the point where I’d get into work early, turn the beast on, boot it up, and then go for breakfast at the NRC cafeteria. By the time I got back and started the testing processes, the tubes were all toasty warm with the exception of the quitter. I’d troubleshoot down to the section level and then feel each of the tubes in the section until I found the cool one. Very technical, but hey, it worked. 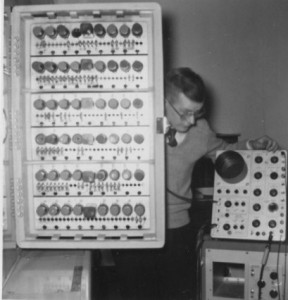 A "nerd" at work behind one of the bays containing 40 of the over 4000 vacuum tubes in the computer.

I was one of the few people who knew enough about the computer to be able to keep it running, so the organization was loath to see me go. During the exit interview, the gentleman from personnel offered me a 10 percent pay increase if I would stay. Ten percent isn’t too bad and would have raised my monthly salary from $239 to over $250. When I told him that my new employer was going to pay me $1,000 a month, he looked stunned and said that surely I must be kidding. When I told him that it was true, that they were going to pay me four times what he was offering, he simply wished me good luck and we parted company.

Now it was off to Nowhereville USA, a small sleepy town called Streator Ill, about 90 miles south of Chicago, where, hidden out of sight in the middle of a corn field, was a “secret” training facility.

Next Stop
Your next stop on this adventure is Training.