Upon leaving the Line, I got married, bought a house, and went to university. University didn’t work out as I realized that I was going to end up being a 50 percent engineer, so I went back to being a 90 percent electronics technician (modesty wouldn’t allow me to say 100 percent).

I went back doing repair and overhaul work (once again) on military equipment (Racal RA-17’s) for a company called Instronics Limited, until I moved into sales. (It was either move into sales or be fired, but that’s another story!) It was a good move, and over the years I was successful enough to move into sales management and ultimately into my own company doing sales training and sales management consulting for over 20 years. 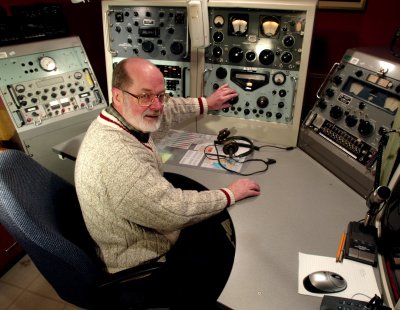 As you can see, I’m still a nerd albeit a dashing looking one. This picture was taken around 2005. I’ve thinned out some of the equipment as my ability to physically pick them up diminishes!

I still dabble in ham radio (VE3UU) and have a small collection of boat anchor radios from the vacuum tube era, including a Racal RA-17 receiver that I used to overhaul as a young technician.

Like many people, my first marriage didn’t last. I’ve always considered that, for most guys, the first marriage is a training marriage. It was good while it did last and I have two fine sons, Michael and Patrick, as a result. I ultimately found my intended life mate, Lorraine, and with her, my wonderful step-daughter, Anita.  This is a marriage that has lasted and will continue to last. We go into our golden years with six grandchildren—Allycia, Heather and Matthew from Anita’s family; Aiden and Callum from Michael’s family; and Cole from Patrick’s family. I’m an incredibly fortunate person.

The End of the Story
There is no end, at least not yet anyway. There’s always another adventure out there for the taking. It’s not true that “all good things must come to an end.” They just keep on going for as long as you let them.

So, let the good times roll.

Post Postscript 2012
Ironically, what was written above was NOT the end of the story. When I wrote (above) that “there was always another adventure out there for the taking,” little did I know how true that statement would prove to be.

In July 2012, I was able to make a return journey to the DEWLine, specifically Hall Beach, FOX-Main, where my Cold War adventures all began in 1960.

You can read all about this trek down memory lane in the Hall Beach 2012 page on this site.